As noted in my Vancouver to Toronto EV road trip plan, I actually went as far east as Ottawa on this cross-country adventure. Since my return was a slow one, I have decided to break up the reports into legs. This will allow for a few more highlights and takeaways on things to see and do as well as an easier breakdown of energy use and charging costs along the way.

With that, here is my Ottawa to Totonto EV road trip report.

What To Do While You Charge in Ottawa?

As noted in my Toronto to Vancouver EV road trip plan, my goal for visiting the nation’s capital was to check out the Canadian Aviation and Space Museum and stroll parliament hill.

For any avgeek or tech nerd like myself, museums like the Canadian Aviation and Space Museum are a bit of a magnet. Inside guests can wander exhibits highlighting Canada’s contribution to the skies and beyond. Notable cool planes and pieces include the Canada Arm, the Alouette One (Canada’s first satellite) and a nose section of an Avro Arrow.

For a full review of my time at the Canadian Aviation and Space Museum see the link below!

Ottawa is an incredibly walkable city. It’s also EV friendly. Looking at Plugshare, there are several parking options near Parliament Hill with EV chargers. My hotel was not far so set off on foot to check out the area. I made my way through ByWard Market, passing many a tourist with Beaver Tails in hand. From there I visited the National Gallery of Canada before having a pint at Tavern on the Hill in Major’s Park. They have a great patio with views of the Ottawa River and Parliament buildings.

From there I hopped on a Lime scooter and made my way to the Hill, stopping to take in the incredible Rideau Lock system on the way. At the time of my visit, there was a memorial for the residential school children and not the truckers protesting mask and vaccine mandates.

Where To Charge and Stay in Ottawa?

I stayed at the amazing Le Germain Hotel near Byward Market. This property features free Tesla charging so no extra cost there. Aside from a super comfy room and free charging, Le Germain offers a set-your-own check out time. I took full advantage of this and walked through Byward Market and Parliament Hill before returning to my room to collect bags and depart for Kingston early evening.

What To Do in Kingston While You Charge?

After spending the night with family (and trickle charging to 80%) I made my way into Kingston. This was a short stop but I did have a few goals; wash the car, get a haircut, and check out a couple of Tragically Hip highlights.

After a much-needed carwash at What A Wash Kingston I made my way to the downtown core. Kingston has a ton of history and cool architecture thanks to the limestone found in the area. It’s also very walkable with many highlights blocks apart. I found a Flo charger near Market Square, plugged in, and took a stroll.

I arrived with 63% which gave me an hour to explore and top up to 75%. Highlights included a lively Market Square (with a stop at the Tragically Hip plaque), Confederation Park, and a quick stop at The Caesar Company for Canada’s favourite cocktail.

For those looking to spend more than a stopover to charge (and you should!), check out this great three day Kingston itinerary!

By the time I got back to the car I was at 77% which was more than enough to continue west towards Toronto. Here were my stops along the way;

About an hour and twenty minutes west of Kingston is one of the provinces most unusual tourist attractions – The Big Apple. What once started as a pie stand has ballooned into everything apple and brings in tourists by the busload. This isn’t normally a place I would visit however they installed both Tesla and J1772 chargers and are free to use. Ok, I’ll bite.

I arrived with 32% and gave myself 30 minutes to explore the grounds. Highlights included a walk through the petting zoo and the gift shop. I have heard the pies there are just OK so opted for an apple fritter and can recommend it!

Full up on fritters and a tank sitting at 40%, I continued west on the 401. I stopped for a quick top-up at the Port Hope Supercharger (~15 minutes to get to 70%) before detouring off the highway and making my way north to Goodwood. Why Goodwood? It was a primary filming location for the show Schitt’s Creek!

In town, you will find notable buildings used in the show. This includes the Tropicana, Rose Apothica, and, of course, Bob’s Garage.

The town is also known for Annina’s Bakeshop. They catered for the show and rose to notoriety with shoutouts from the cast. The butter tarts are supposed to be great however the shop was closed on my visit. 😔

I left Goodwood with a 35% charge for the 45 minutes drive into downtown Toronto. I was to arrive with a 20% charge however I was a bit worried about traffic draining my battery. I had detour options lined up however traffic wasn’t too bad and I arrived with 11%. Still, was a bit concerned with my traffic map showing so much red.

Where To Charge and Stay in Toronto?

I stayed at the Westin Harbour Castle, largely for the harbour views and access to downtown and Toronto Island. Although there is no EV charging on-site, the parking garage next door at the RBC Waterpark Place has free charging with paid parking. There are 14 charging stalls in P1 and on my visit, only one was in use.

What To Do While You Charge in Toronto?

I arrived in the evening and made the most of my location by taking one of the ferries below my hotel to Toronto Island. From this $8.50 (return) ferry ride, you get million-dollar views of the city.

On Toronto Island, I did much of the same – photos of the city as the night took over. I also stopped for a beer at the Toronto Island Marina bar.

Before departing the next morning I walked over to St. Lawrence Market and had a breakfast of peameal bacon on a bun. I followed that up with a butter tart and Americano from nearby Balzac Coffee.

Fueled up. I made my way north for my next leg – Toronto to Thunder Bay. Stay tuned for that!

My Ottawa to Toronto EV road trip was a smooth one. Still, there were some takeaways;

Why so low? My charging was included in my Ottawa accommodations as well as my family visit. Ditto for the parking garage in Toronto. Searching out free charging on the way to Goodwood left just a top-up at a Port Hope at a Supercharger and since I still have credits, nothing was billed to me. This left the lone Flo charger in Kingston which accounts for the $1.67.

Now, if we look at energy use and costs tied to that, this Ottawa to Toronto EV road trip should cost ~$12 (not including free charging). Still, pretty amazing given gas prices! 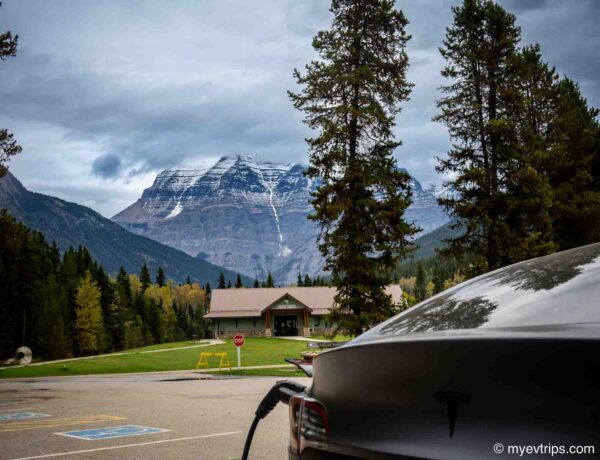 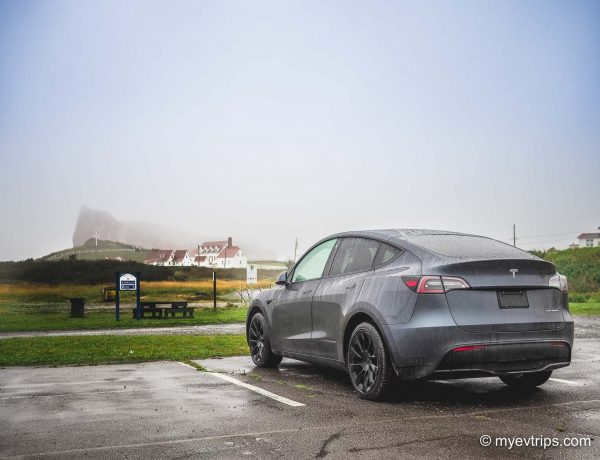